A Vedic Vastu Expert and a Geopathologist.

Her strength lies in application of Vedic Principles of ancient architecture in modern structure with great results.

A Certified Geobiologist and a Radiation Analyst, from Germany.

After doing her schooling at Baldwin Girls School, Bangalore, and acquiring B.Com from Bangalore University, she went on to do an MBA (marketing) from Symbiosis, Pune. But she found her true calling when she started studying Earth sciences, Vedic Vāstu, Reiki, healing, and flow of energy, especially earth sciences and radiation.

Always keen and inquisitive, she went to get her Ph.D. in Vedic Vāstu and Earth sciences from Zoroastrian College, Mumbai, where her topic of research was “Earth Sciences and Radiation”, hence earning the right to add Dr. to her name.

She established contact with Dr. Dieter Schaffer from Aachen Germany. Dr. Schaffer is a renowned earth scientist and radiation therapist with his reach in almost 75 countries around the world.

She was invited to attend professor Schaffer’s diploma course, offered through his organization “International Geo Safe Institute”. After intensive training and submitting her research, she was granted a “Diploma in Geopathology, Earth Sciences, and Electromagnetic Radiation”. Under his guidance she also got the opportunity to attend and cleanse high radiation spaces. Since then she has been at the forefront of Electromagnetic radiation, Electromagnetic field and Earth radiation neutralization in India, and Nepal

She is the first person in the world to link ancient Vedic Sciences with Geopathology; she did path-breaking research on this topic with great results. She was able to demonstrate the link between radiation and disease, and the harmful effects of radiation.

Currently, she and her team, at drjayshreeom.in are involved in radiation neutralization, Vedic Vāstu, energy fields, and allied businesses.

In the ever-growing list of achievements, in March 2018, Dr. Jayshree was selected to represent India at the United Nations (UN), Commission on the Status of Women (CSW62). She was in the USA for 3 weeks. Her topic of presentation was "Importance of Vastu and Vedic knowledge associated with Vastu and how it can empower women". Her work and views at the UN are held in high esteem and are being applauded and studied around the world.

She has undertaken a certification diploma course of Government of India, from Kavikulguru Kalidas Sanskrit University, Ramtek, Nagpur which enabled her to dispense her immense knowledge of Vāstu to different Universities and Colleges around the world. This makes her a Government of India certified Vastu consultant.

The title of Yoga Shiromani has been added to her feathers after her stringent training of the hatha yoga teacher training course in Netala, Uttarkashi, under the banner of International Sivananda Yoga Vedanta Centre, Headquarters, Canada. She was trained under top teachers in Hatha Yoga, Bhagavad Gita, Vedanta, and Satsang.

She is also a qualified Pranic healer (till Arhatic Level) and a Grand Master in Reiki.Besides being a voracious reader of ancient texts and a keen long time practitioner of hatha yoga she is also an avid meditator since her childhood. She has attended various courses on Spiritualism, meditation, and Vedic philosophy.

An Artist by birth, it was her first field of interest, but coming from a business family she was asked to take up commerce. She paints to date and makes energized wall hangings for her family, friends, and admirers.

A mother of a 17-year-old son, from Mayo College, Ajmer, she says that Motherhood is her favorite role. She reiterates that “Children emulate us subconsciously. So, behave the way you want your kids to be”.

She was bestowed with the title of “Om”, after her initiation from Om Swami ji, her Himalayan Guru. Once a person is initiated, they rise above the doctrines of religion and society, thus belonging to the Lineage of the Guru.

She loves to state that she shares her birth date with Swami Vivekananda. He popularized Yoga, keeping Shastras as the base. She would walk the same path and do something similar for Vāstu Shastras and in the process spread the ancient wisdom of sages through her practices, books, blogs, and seminars.

Dr. Jayshree Om is working diligently on bringing the wisdom of ancient scriptures like Mansaar, Mayamat, Samrangan Sutradhar, Manushlaya Chandrika, and Raj Vallabh texts into English and on popularizing the study of Vāstu around the world. The translation of Viswakarma Prakash in English was her dream project, which was achieved through stringent and rigorous work, for over five years, with practice and theory.

Her mission is to enable the implementation of Ancient Vastu Principles to Modern structures. Furthermore, she wants to remove the stigma attached to ancient sciences and bring forward practical ways to deploy ancient methods. She is a full-time consultant, working towards enhancing the lives of people who consult her, for Vāstu, Geopathology, Radiation, and Astrology queries.

She is committed and dedicated to launching a series of Vastu books and unveil the ancient knowledge of Vastu to the modern reader. Scriptures I, II, III of the series “The Ancient Science of Vastu” are already published and regularly feature as no.1 on Amazon best-selling list. The books have gained widespread appreciation and accolades from critics and readers from all over the world. 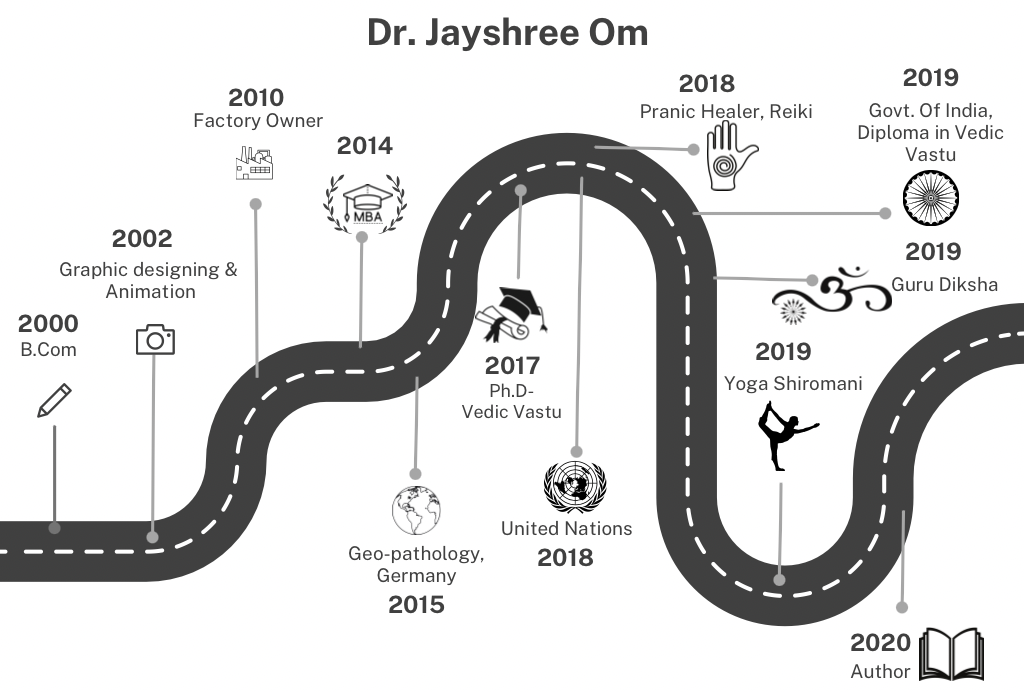